While you might would have heard a lot about CONTOURA vision being projected as an advanced treatment beyond LASIK and SMILE, the fact is that CONTOURA is a new name given to conventional topo guided LASIK.

Although It improves upon the traditional LASIK procedure by using mapping technology to map the unique contours of the surface of your cornea and the scanning procedure samples up to 22,000 elevation points on each eye to create a unique vision profile. However the biggest limitation with LASIK, is existent with CONTOURA and that is flap creation.

So what’s in a flap:

While LASIK has been around for decades yielding happy results, flap making has been one of the limitation which has left a little room for associated risks with LASIK. The same is overcome with SMILE ® which is totally flapless.Either using a blade or through a laser, LASIK and its variants like CONTOURA involve making flap (roughly 18-20 mm in size).

Chances of flap dislocation: Skilled surgeons carefully place the flap back in the right position and it heals back on its own in less than few days under normal conditions. But in certain cases, there might be a chance of dislocation of the opened flap after surgery, inviting problems like blurred vision, night glares, and severe pain. 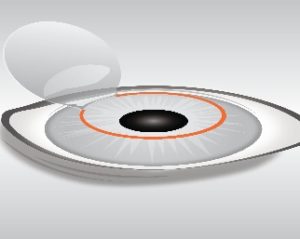 The biggest fear with flap associated risks is chances of dry eyes. Dry eye disease is a common ocular surface disease and plays a significant role in the ocular comfort and visual performance of patients, with the potential to have a great impact on their quality of life. The studies demonstrate that SMILE resulted in a lesser degree of dry eye disease and a faster recovery of tear function compared to FS-LASIK.

Laser-assisted in situ keratomileusis (LASIK) continues to be a popular refractive surgical option; however, almost half of all LASIK patients continue to report dry eye symptoms following surgery. The introduction of the femtosecond laser (FS) has seen FS-LASIK become a more accurate and safe surgical option, with a reduced rate of dry eye disease, which is likely due to reduced neurotrophic effects on the corneal nerves during formation of the corneal flap. Now SMILE is established as a “flapless” procedure in which an intrastromal lenticule is cut by a femtosecond laser and manually extracted through a peripheral corneal tunnel incision. The refractive predictability, safety, and patient satisfaction of SMILE are comparable to FS-LASIK. SMILE has the benefit of being minimally invasive, with a lesser degree of damage to the cornea and corneal nerves, and may therefore result in fewer complications and reduced symptoms of dry eye. The key difference between FS-LASIK and SMILE and their impact on corneal innervation may lie in the fact that FS-LASIK affects the epithelium and anterior stroma, thus resulting in greater resection of the sensory nerves of the cornea, while SMILE affects the posterior stromal bed with relatively greater preservation of the corneal subbasal nerve plexus.

SMILE ® has received FDA Approval certifying its treatment standards. Over 2 million eyes have been globally treated across the world.